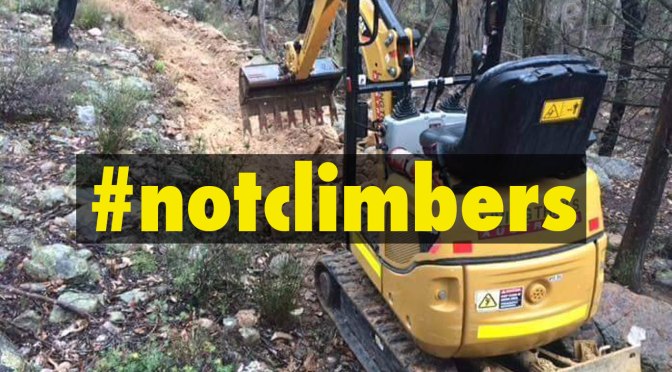 Parks Victoria’s claim that climbing should be banned because of environmental impact flies in the face of their own actions. The biggest group damaging the Grampians is Parks Victoria. It’s all part of a push from the government and commercial tourism groups to attract more visitors and thus more dollars. As Kevin Costner so famously said “if you build it they will come”. A bigger carpark attracts more cars. Make it easier to walk to somewhere by installing a paved track and ladders and more people will walk there. The following photo essay is snapshot of the kind of damage PV is routinely allowing in the name of “progress” and “growth”. Much of the recent damage they so proudly promote is from the Grampians Peaks Trail® – a 144km walking track being constructed over the next few years – with attached luxury lodges. This isn’t just connecting old walking trails together – over 83km of new track is being cut, bulldozed and jack hammered through virgin bush to attract more tourists and their $$$. You can watch some of the private contractors working on the Peaks Trail in this promotional video:

This is the ugly truth behind how supposed low impact bushwalking tracks are created. So when someone complains about some climbers chalk, safety bolts or a foot pad – show them this. #notclimbers

“the team is clearing at a rate of 120 meters per day in dense sections and up to 600 meters per day in lighter sections. Clearing typically involves carving a path through foliage, removing bushes and, where necessary, trees to create a navigable path for the track construction.”

“We also expect an additional 35,000 visitors to the region annually…”

“Thousands of hand-built steps are being shaped from sandstone which has been mainly sourced on-site.”

Watch this Ch9 video where PV talks up their environmental destruction.

“Contractors have completed work on over 1.5km of steel walkway on the remote Major Mitchell Plateau”

Friends of the Grampians April 2019

“the concerns remain about where the money for the upkeep of the trail will come from, and whether that money will come at the expense of other pressing needs of our Park.”

“These works involve the pruning and removal of trees and vegetation and are carried out to ensure the corridor is cleared for construction of the walking track. Track clearing requires contractors the most efficient access points and the most effective means of removing all vegetation from the alignment”

“there is significant harm… because you’ll end up with these private enclaves within what is essentially publicly-owned land. Ninety-nine years is essentially private ownership in a sense. We also know that if something starts small, even if it starts environmental friendly, it inevitably grows.”

“Parks Victoria is looking at how the fully facilitated walks can include accommodation, food, beverage and landscape interpretation.”

“The Grampians Peaks Trail is a walking experience and does not offer rock climbing tours.”

“The areas, some of the
most spectacular locations in the park, have
provided evidence of people camping on
or near the peaks for thousands of years.
Previously unknown occupation sites, scar
trees, surface scatters, greenstone originally
from the Lancefield area nearly 250km away
and rock art have all been rediscovered.”

“Any new trail to be constructed as part of the Grampians Peaks Trail should be offset by closures of trails, tracks and/ or roads elsewhere in the park if possible. “ 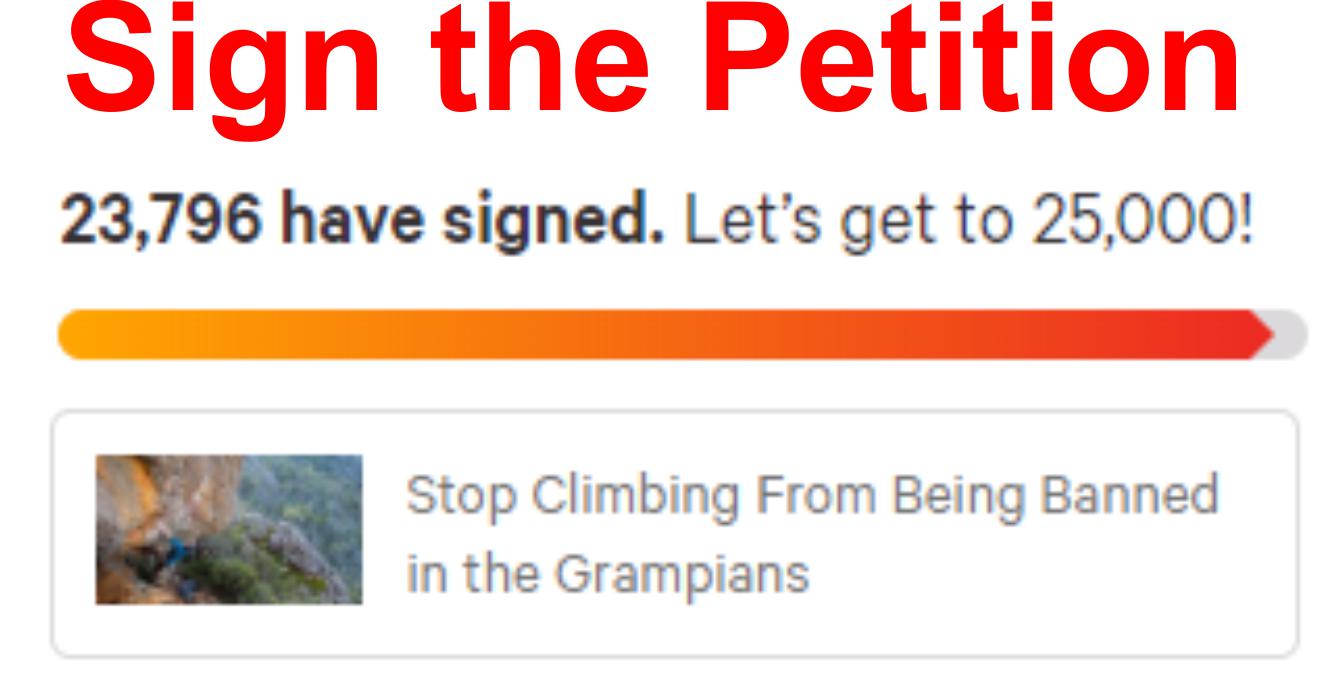 Round Table 4 – Part 2 plus Legal Updates

This comprehensive report covers Round Table 4 – Part 2 including: Headlines – Information regarding Parks Victoria’s “Current Management Protection Regime” – Cultural Heritage Survey Progress – Environmental Survey Progress – Survey Scope and Cost This is followed by a section on Legal Updates including a Legal Action Timeline reporting on significant events that have […]

4th March 2020 Mike Tomkins There have been some recent changes on the ACAV Committee. This is a brief update on the comings and goings. We will be providing some positive information on climbing access initiatives over the coming weeks and regular updates are planned to ensure that ACAV members are kept fully informed. The […]

This update has been provided to members with the approval of the ACAV committee. It’s a short update (and a bit overdue) on things happening in the last few months; but we hope to bring members some more news very shortly.