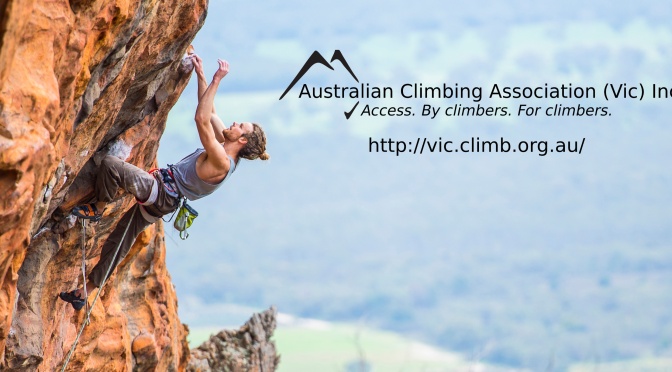 Tonight in Natimuk, at the annual ‘GoatFest’ is a town-hall style meeting following the short films. It will be an opportunity for climbers to ask questions of Cliffcare and the GAWG, and find out what has been going on behind the scenes regarding the Grampians climbing bans (and we don’t doubt that a lot as been happening behind the scenes).

Also, there will be a presentation and announcement of a newly formed access group the ACAV (Australian Climbing Association Victoria).

We are hoping that a recording (Audio or Video) of the meeting will be arranged, and we’ll put that up when it becomes available.

This post is to very briefly outline what this new ACAV group is, and attempt to dispel (or confirm!) any rumors that may be circulating.

First, this new group is not affiliated with ‘Save Grampians Climbing’, and has a large base of grassroots support from around the climbing community.

It was important to those creating this new group to gain the support of Cliffcare and the Victorian Climbing Club, rather than be seen as creating an opposing group, and of course the resulting division in the climbing community. This was never going to be an easy task, but big steps have been made in the past 48 hours, and will hopefully be confirmed at the meeting tonight.

Importantly: “The ACAV does not replace VCC or CliffCare, and ACAV acknowledges the good work these bodies do for the climbing community, and that respectful negotiation with Parks Victoria is paramount. Instead, ACAV works at a strategic legal and political level with key stakeholders to promote access, build new policies, and to change existing policies”.

The primary aim/mission of the ACAV is to

“represents the interests of the Victorian climbing community at the political and legal level, and aims to promote and protect access to rock climbing in Victoria while being respectful of unique cultural and environmental values”.

This model has been used with great success in the ACAQ – Queensland group.

We’ll make a follow-up post after the dust has settled following GoatFest. For now, we’ve updated our ‘How Can I Help‘ section, and you can download the A4 flyer below which will be handed out at Goatfest.

Have your say on the future of climbing and bouldering in the Grampians/Gariwerd National Park. Template available below. Submissions responding to Park Victoria’s Greater Gariwerd Landscape Draft Management Plan (GGLDMP) close on Sunday 24th January 2021. The GGLDMP is a critically important document as it will direct management of the Grampians for possibly the next […]